Does this Commonly Prescribed Drug Make You Fat? 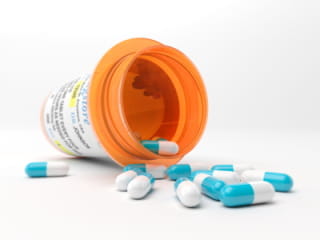 Let me start this article by saying that I certainly understand the importance of antibiotics in our medical system.  They have saved literally millions of lives from serious infections.  However, we have to consider some of the side effects of popping so many antibiotics throughout our lives, and as you'll see in this article, increased belly fat can be one of those side effects.  Not fun.

Doctors give out antibiotics prescriptions like candy, at every little minor health issue, including viral infections (which obviously makes no sense, since antibiotics kill bacteria and not viruses).  And remember that whenever you pop that antibiotic pill, you destroy a good portion of your 'friendly' bacteria in your gut that help with your digestion and your immunity .  As I'm sure you can understand, those friendly bacteria in your gut are of MAJOR importance to your health.

So whenever you take antibiotics, you're essentially killing the bad guys (the bacterial infection that you might have), but you're also killing the good guys (your friendly gut flora), and thus, you disrupt an important part of your digestive and immune systems.

And as you'll see in the article below, taking antibiotics not only kills some of your beneficial gut bacteria, but even just one cycle of antibiotics can also possibly PERMANENTLY disrupt the balance and health of your gut "microbiome".

...and the shocking part that the title of this article alluded to:  antibiotics use can possibly increase your abdominal fat .  Youch!

A couple important passages in the article below to pay close attention to:

2.   In the study below on antibiotics use in US veterans, take note of the sixfold increase in the hormone ghrelin, and how ghrelin increases your appetite, and can also increase abdominal fat.

3.   Take note also of how antibiotics are used as growth promoters in livestock... particularly to increase body fat levels and fat marbling of meat.  It wouldn't be a far stretch to correlate this to increased visceral fat in humans in the abdomen.

Hmm... you might want to really question your doctor hard next time he/she prescribes antibiotics for you and make sure they really are necessary for your survival.

The Problems with Antibiotics: They Kill the Good Guys and Make You Fat

by Mark Sisson , best-selling author of The Primal Blueprint

Every time you take antibiotics, billions of domesticated gut flora die inside you.

As I mentioned in recent blog posts, antibiotics are designed not to target human cells, but the same cannot be said for the commensal bacteria living in our guts. See, most antibiotics don’t discriminate between “good” and “bad” bacteria. They target bacteria. They aren’t us, they are foreign entities, but we wouldn’t be us without them. We need them to function properly.

It’s a bit like bringing in an exterminator to kill the bugs infesting your house, and the guy ends up killing your dog and making your cat act funny, along with killing the insects. The job is done, and he technically did what you requested, but now you have to tell your kid that Buddy moved to a farm upstate to go be a sheepdog and figure out how to deal with your cat peeing on the sofa and scratching up your stomach (leaky gut, get it?). Not very fun, and not what you bargained for.

The results of a 2010 study on the lasting effects of antibiotics on one’s gut flora are rather scary. Over a 10 month period, three individuals – humans – each went on two courses of ciprofloxacin, an extremely commonly prescribed antibiotic often used to treat bone and joint infections, respiratory tract infections, gastroenteritis, endocarditis, urinary tract infections, cellulitis, infectious diarrhea, anthrax infection, typhoid fever, and skin infections to name more than a few. In other words, it’s regarded as a trusty all-purpose antibiotic, effective across all species (vets often prescribe cipro). So, what happened to the patients’ gut flora populations after taking cipro?

Three to four days into the treatment schedule, gut diversity was lost and composition was altered . What flora remained became more homogenized, and the various ratios of the more than 400 species of bacteria that live in the gut became lopsided. One week after the conclusion of each treatment, gut flora had recovered, but only slightly. It was a shade of its former self.  Diversity improved, but not to original levels. Composition began to normalize, but it was incomplete. Things were stable and the diversity/composition protected from further change, but the state of flora being protected was not the same pre-cipro state.

The authors admit that these are uncharted waters. They don’t know, nor do they pretend to know, the lasting effects of hosting an altered microbiome in your gut.  They don’t use the words “good” or “bad” to describe bacteria.  They just know that it’s altered, and – as much as a ten month trial can tell us – perhaps for good.  (Scary huh)

I dunno – I have an inkling of an idea that maybe, just maybe, forever altering our gut flora isn’t such a hot idea . I think the researchers would agree, but they can’t say anything without knowing for sure, of course. But my inkling isn’t exactly unfounded. We do have some evidence that altered gut flora are associated with weight gain . We even have evidence that antibiotics cause weight gain .  Let’s take a closer look.

Foremost, of course, is the widespread usage of antibiotics to “increase the growth” of livestock. I use quotes because what they’re really doing is making the livestock FAT by disrupting the microbiome of their guts. One study even determined that eliminating routine administration of antibiotics to livestock for the purposes of increasing weight gain wouldn’t affect dietary protein availability in developing nations. My guess as to why?  Antibiotics are increasing body fat accumulation on these animals , rather than purely inducing sheer hypertrophy of muscle meat – unless you know of any bodybuilders who cycle penicillin and cipro – and the resulting weight gain is coming more from fat than protein.

A team of researchers transplanted gut bacteria from obese mice into lean mice. The lean mice enjoyed a 60% increase in body fat and a rapid, 14-day descent into insulin resistance following the gut flora alteration .

In a later study, members of that same team induced obesity in mice through diet. As they fattened, a specific type of Firmicutes bacteria bloomed – it began to overgrow in the gut. Transplanting this Firmicute into lean mice made the lean mice fat. Lean mice who received transplants from lean donors did not get fat.

Oh, and there’s also some cool evidence in humans. Those same researchers who showed that lean mice have different gut flora than fat mice and that transferring fat mice flora to lean mice made the lean mice fat studied whether this was true in humans. It is. Just like the mice, lean human guts contain more flora from the bacterial phylum of Bacteroidetes and less from the Firmicutes phylum, whereas obese human guts contain flora more heavily weighted toward Firmicutes . Furthermore, both mice and humans with “obese” gut flora (high in Firmicutes) derive more energy from food and have an increased ability to “harvest energy.”

Okay. So it seems pretty clear that gut bacteria plays a role in obesity , and there’s strong evidence that it’s a causal role. But the studies up until now have only shown that altering gut bacteria by adding flora from obese animals to the guts of lean animals makes them gain weight. The question, then, becomes whether altering gut flora via antibiotic usage can have similar effects on weight.

One Martin Blaser, an NYU microbiome researcher, believes he has the answer. Citing the 2010 study mentioned earlier and another that he authored himself, he speculates that not only does antibiotic usage permanently change our gut flora, it also promotes obesity .

Blaser examined the effect of antibiotics on Helicobacter pylori, a common member of the human gut biome. While there’s evidence that H. pylori increases the risk for ulcers and gastric cancer, making it a popular target for physicians (even in asymptomatic patients) wielding a hammer made of antibiotics, it’s also been living in human guts for at least 58,000 years. You might imagine that casually flouting such an extended co-history together could have some unintended consequences. You’d be right.

Blaser used US veterans who were scheduled for upper GI endoscopies (close examination of the upper gastrointestinal tract). Of the 92 vets, 38 had no H. pylori, 44 tested positive for H. pylori, and 10 were indeterminate. 23 of the H. pylori positive were given antibiotics, and all but two had total eradication of H. pylori. So, what happened to the 21 subjects who were initially replete in H. pylori but who eradicated them through antibiotics?

They gained the most weight. Their BMIs increased by 5%, give or take 2%. The other vets had no weight change.

The ghrelin increase is the most interesting effect to me. It does a number of things, the foremost of which is to increase hunger .  High levels also increase abdominal fat . So, after taking antibiotics and losing all their H. pylori, patients weren’t as satisfied after meals, they gained more weight, and the weight they gained was likely concentrated in the abdomen .  Bad stuff all around. I’ve written about the dangers of belly fat before; it’s not just a matter of "looking good naked".

Man, antibiotics as growth promoters in livestock really make sense when you put it all together. They give you all sorts of awesome stuff:

Good for the economics of factory farming... not good for human health!

First off, I personally would never take antibiotics unless I had a serious life threatening infection.

Maintaining great health and a strong immune system can go a long way to avoiding common sicknesses and infections.  Two of the most important things I can think of right off the bat are to continually load up your system with probiotics (to strengthen your gut flora colonies naturally), and also to maintain adequate levels of vitamin D from your diet and through daily sunshine (which is vitally important to your immune system).

If you have taken antibiotics and thus disrupted the health of your gut flora, you need to make sure you do your best to re-establish your gut flora with probiotics.  You want to diversify the sources of probiotics to get a lot of the various strains of "friendly" bacteria and other microbes.  Good sources of probiotics are fermented foods such as yogurt, kefir, sauerkraut, kimchi, kombucha tea, other probiotic drinks, and a good probiotic supplement, which protects the probiotics through your harsh stomach to colonize the intestines.

If you keep yourself very healthy and maintain an extremely strong immune system, you drastically reduce your chances of getting infections and other sicknesses.  Personally, I haven't taken antibiotics since I was a teenager (and I'll never take an antibiotic again unless I had a life threatening infection), and I also haven't been sick (not even a cold) in at least 7 years.

You can read this article to see my 7 powerful tips for never getting sick .  The tips in that article are very powerful to boosting your immune system so you don't get sick in the first place.

Please share this article about antibiotics with your friends and family to help protect their health:

Are you buying toxic fish at the grocery store and at restaurants?

3 Tricks to make your coffee super-healthy

Daily food plan to get perfect digestion and super immunity

The gut-healing and joint-healing benefits of BONE BROTH

This sweetener is promoted as "healthy" but actually destroys your gut microbiome (beware of this, as it's hiding in tons of foods)