Is Your Microwave Cooking Making You Sick?

A look at how microwaved food can negatively affect your health 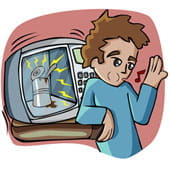 Do you know what (besides a television) is in almost every home in America? It’s a microwave oven. Because microwave ovens are quick and easy and don't take up much space, they are used for meal preparation in the home, at the office, and even restaurants. Even your favorite healthy restaurant may depend on these electrical devices to quickly heat up or cook foods. So, the question here is —

Are microwave ovens safe, and is it ok to eat the food cooked in them?

Before we look at the science of how microwaved food can affect your blood chemistry and negatively affect your health, let's look at a bigger picture, common-sense thought process about this...

It's just common sense that such a radically different cooking method will alter the chemistry of the food to negatively impact our health.

Now onto a little more science...

Let’s take a look at how microwaves ovens work

Microwaves are a part of the whole electromagnetic spectrum of energy that includes light waves and radio waves. They travel at the speed of light--which is about 186,282 miles per second. So how does that oven heat up the food so fast?

Inside the microwave oven, there is a “magnetron” which is a tube full of electrons. The electrons in the microwave oven react with magnetic and electronic energy and become micro wavelengths. This is the radiation that interacts with the molecules in food.

This agitiation deforms the molecules in food and creates new unnatural radiolytic compounds previously unknown to nature . These strange foreign compounds in microwaved food have been shown to damage the blood, the digestive system, and our immune systems .

Microwave ovens have been actually been around for about 40 or so years, but so far, only a couple of in-depth scientific studies have been done on them.

Extensive research, though, was conducted in both Switzerland and Russia on microwaved foods and their effects on the human body. Both studies concluded that microwaving foods significantly deteriorated the nutrient value of the food, distorted protein molecules in the food, and created new, radically unnatural compounds. Most alarming, however, was that the subjects' health deteriorated from eating the microwaved foods.

When food is cooked in a microwave oven, it has:

And here is a really interesting study—done on grain germination:

The grain watered with microwaved (and cooled) water would not not even germinate or grow! It’s pretty obvious that microwaving changed the water chemically and destroyed its ability to nourish a plant.

Ok, so maybe it’s ok to just heat leftovers in the microwave oven once in a while?

NO! Actually, food heated in a microwave is heated unevenly creating super-heated spots and cool spots. Those cool spots may actually harbor bacterial growth such as salmonella, and you end up with food poisoning.

In addition, when you use plastic containers or plastic wrap in contact with your food, you end up getting all sorts of nasty chemicals like di(ethylhexyl)adepate, or DEHA, (a carcinogen), Bisphenol-A or BPA (a cancer-causing agent in plastics) and xenoestrogens (synthetic estrogens) in your food!

In one recent study, it was found that carcinogenic ingredients in plastic wrap were 10,000 times the FDA limit for safety!

Exposure to BPA , used in the manufacture of polycarbonate and other plastics, has been shown to cause reproductive problems and erectile dysfunction , and has been linked with cardiovascular disease and diabetes in humans.

Xenoestrogens are really nasty synthetic estrogens that seem to show up everywhere. In men, xenoestrogens can cause low sperm counts and feminization (like the dreaded “man boobs”) and breast cancer and reproductive problems in women. Xenoestrogens promote weight gain around the belly and chest in men, and in women, it shows up as fat in the butt, hips, thighs and the back of arms.

So, in addition to being really unhealthy, microwaved foods can make you fat !

Parents should never warm breast milk or formula in the microwave oven—not only can it superheat the milk and burn the baby, but microwaving destroys the very valuable nutrients, enzymes and protein vital to babies' growth!

And here is something really scary: in 1991, a patient received blood that had been warmed in a microwave oven. That patient died of a severe anaphylactic reaction to the blood. The microwaving created something totally unrecognizable by the body!

If you want to be safe, healthy and LEAN, avoid your microwave—totally.  Personally, I threw out my microwave about 6 years ago and haven't even missed it!

There are far healthier and better alternatives:

Or you may want to try this-- small countertop convection ovens are great for cooking foods faster and more evenly than a regular oven or on the stove.

You can actually cook a frozen 15-oz. grass-fed ribeye in 20 minutes, and it is delicious; browned, tender and juicy. These little convection ovens will broil, bake, fry, roast, grill or steam your favorite foods, including meat, chicken, and vegetable. It takes 20-30% less time than a regular oven, and uses about 75% less energy.

This is a far healthier option than a cancer-causing, nutrient-robbing, microwave oven !

To your good health,

Please feel free to email the link to this page to your friends and family so they can make the smart decision to throw out their microwaves and protect their family's health!

The problem with yogurt? (what you didn't know about yogurt)

The #1 most important diet tip EVER

7 Reasons to eat MORE GARLIC (plus your gut health)