These 5 powerful spices are proven to boost your metabolism, fight the aging process, control blood sugar, reduce inflammation, protect your heart, and reduce your risk of both cancer and heart disease.  Use these super-spices more often and reap the health benefits! 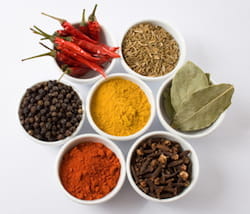 Every time you sprinkle your meals with herbs or spices to boost their flavor you are also supercharging the health powers of your food without adding a single calorie.

You can transform something ordinary and bland into a meal that is bursting with flavor and nutrition, as well as the added side benefit of being good for your body, just by generously adding herbs and spices to your meals.

Did you know that a few specific herbs and spices contain a wide variety of some of the most potent antioxidants of any food ? In fact, many herbs and spices rank even higher in antioxidant activity than fruits and vegetables, with some spices such as cloves, turmeric, and cinnamon having as much as 10-50x more antioxidants measured by ORAC value (on a weight to weight comparison) compared to the mighty blueberry.

The benefits of the powerful antioxidants in these super-spices include protection against many life’s most serious degenerative diseases like cancer, heart disease, diabetes, arthritis, macular degeneration, Alzheimer’s, and overall aging.

Herbs and spices add tons of extra nutrition and flavor on their own, but when combined with the nutrition in other foods, they actually boost the natural antioxidants, phytonutrients, and anti-inflammatory power of the food.

Besides the super antioxidant protection for your body, herbs and spices can also:

Here are 5 of the most potent anti-aging superfood herbs and spices you can eat: 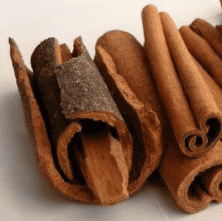 Super-Spice #1: Cinnamon - This ancient spice has one of the highest antioxidant levels of any spice.

Cinnamon is highly effective at helping to stabilize blood sugar levels, making it very effective for those with diabetes (type 1 and type 2) to help control blood sugar response from a meal.

In one study of people with type 2 diabetes, just two teaspoons a day reduced blood sugar as much as 20-30% , as well as lowering LDL cholesterol and triglyceride levels.

Cinnamon also has powerful anti-inflammatory properties, and has been known to relieve pain and stiffness in muscles and joints, including arthritis.

It has a positive effect on brain function, and smelling cinnamon, or chewing cinnamon flavored gum, can possibly help improve memory and attention.

Cinnamon also reduces inflammation in blood vessels that leads to atherosclerosis and heart disease, as well as having anti-fungal and antibacterial properties.

Simple ways to add Cinnamon to your daily routine:

Try cinnamon in your smoothies, yogurt, oatmeal, mixed with berries, or as a healthy addition in your coffee or tea.

Super-Spice #2: Cumin  - Cumin is another spice that is especially high in antioxidants, but cumin is known for being especially good for digestion. It stimulates the gallbladder and pancreas to secrete enzymes and bile that break down food into usable nutrients your body can use.

Due to the high antioxidant content, Cumin can help fight inflammation throughout the body, and thereby helps in slowing down the aging process.

Cumin also helps detoxify the body, and is highly effective for respiratory disorders like asthma and bronchitis.

Cumin, like cinnamon, helps keep blood sugar levels stable, which means cumin is great for diabetics or pre-diabetics for post-meal blood sugar control, and it means less chance of weight gain and excess body fat.  This super-spice has been proven to work as well as some commonly used diabetic drugs at regulating insulin and blood sugar. Cumin is also a very good source of iron, vitamin C and vitamin A, which benefit the immune system.

Simple ways to add Cumin to your daily routine:

Cumin goes great in chili, or really any Mexican style dish!  You can also add it to your sauteed vegetables, stews, or make some warm, soothing cumin tea 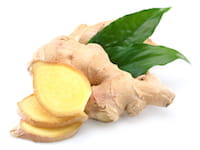 Super-Spice #3: Ginger - Ginger is VERY powerful for your health!  Ginger contains over 25 different antioxidants, which makes it extremely effective at fighting free radicals in many different body systems.

Ginger is best known for its ability to reduce nausea and vomiting, as well as motion sickness. In fact, ginger may even be more effective than Dramamine, one of the most common drugs used for motion sickness.

And because ginger does not have harmful side effects like many drugs, it is very good for nausea from pregnancy. Studies actually show that just 1 gram of ginger before surgery is more effective than the standard anti-nausea medication given for post surgical nausea and vomiting.

Ginger is also a soothing remedy for sore throats from colds and flu because of its antiviral properties. Ginger also helps coughs and is an effective expectorant. Try a tea made with hot water simmered with a few slices of ginger and a small amount of honey and lemon for a soothing tonic when you are sick.

Because ginger is such a strong anti-inflammatory, it helps reduce the pain and swelling of arthritis, and muscle aches. Ginger also fights cancer, reduces cholesterol, and prevents blood clots that lead to strokes or heart disease.

Simple ways to add Ginger to your daily routine:

I like to use a slice of ginger root in my hot teas and, sometimes, in our batches of iced teas.  I also love piling ginger on top of sushi!  I take a couple capsules of ginger daily since it's not as frequently used in dishes as some other spices.  If you do vegetable juicing, adding some ginger to the juicer also adds great flavor!


Super-Spice #4: Oregano - This herb contains an oil that is a very potent anti-bacterial, anti-fungal and anti-viral agent, rosmarinic acid (also found in rosemary).   Oregano oil has been used to treat a wide range of conditions from bacterial and viral infections, to parasites and stubborn fungal infections. Although the oil of oregano is most often used for medicinal purposes, the herb itself can provide many of the same benefits when consumed regularly.

Oregano also relieves inflammation, internal or external, and can offer relief from allergies, aches and pain, without side effects.  Oregano is very high on the ORAC scale of measured antioxidant value, making it powerful at fighting free radicals and quelling inflammation.

Simple ways to add Oregano to your daily routine:

Oregano makes dishes like burgers, eggs, chili, stews, and meatballs delicious; it’s also a GREAT addition to any dish using tomato sauce as a base.

Super-Spice #5: Turmeric - Turmeric’s yellow-orange pigment, curcumin, is the main active ingredient in this super spice. Amazingly, curcumin’s anti-inflammatory benefits are comparable to drugs like hydrocortisone and over-the-counter anti-inflammatory medicines like Advil and Motrin. But, unlike the drugs, curcumin is not toxic at all, nor does it have the dangerous side effects.

Curcumin is more effective at slowing down the development of Alzheimer’s disease than many medications, because it decreases inflammation and oxidation in the brain. This spice also speeds up the recovery time from strokes as well.

Most importantly, turmeric is one of the most potent anti-cancer spices available.  In fact, Turmeric and it's derivatives (such as curcuminoids), are currently being studied in alternative natural cancer treatments.

Simple ways to add Turmeric to your daily routine:

Try using black pepper along with turmeric (I use this combo in my eggs every morning) helps to increase the absorption of turmeric's curcumin in the body.  You can also mix it in with sauteed veggies, stir fries, or the obvious, any curry dishes. Tumeric is also a great compliment to any recipe that features lentils.  You can also find turmeric root in some stores and use the fresh root just like you would ginger to make teas.

Here's what you should do next:

I want to share with you how to discover even MORE delicious foods, spices, herbs, and nutrients that:

You will also discover over a dozen surprising tricks you can use daily to FIGHT aging, helping you to look 5-10 years YOUNGER... click the button below to go to the next page to discover unique and delicious anti-aging foods, spices, herbs, teas, and other potent youth-enhancing nutrients: