The 7 WORST Exercises that HARM Your Body

These 7 common exercises are popular with many exercise enthusiasts, but can actually do more harm than good... Are you doing these?

Unfortunately, there are certain “exercises” in the gym that cause more harm than good. I’d like to take a strong look at the 7 most prevalent injury-causing exercises in most gyms. The worst part is that these exercises are pretty much useless when it comes to building strength or losing fat. There really isn’t much of a point in doing them, whatsoever, and yet they can destroy our results.

It’s time to put an end to the worst exercises on Earth. I’m here to help you understand how your body moves, why it responds to exercise the way it does, and how to minimize your risk while you maximize the effect from every exercise you do.

As a side note, I think it’s important to mention that the last thing I want is for you to feel discouraged; rather, it’s important that you feel inspired to know you have eliminated the negative from your exercise program. Now, you’ll be able to safely rely on the fact that “you’re doing it right” when you exercise. Plus, I think you’ll be shocked to realize how much you’ve learned about your body’s ideal positioning and muscle recruitment strategies with exercise.

If an exercise creates muscle imbalances, this can lead to joint deterioration all over your body and even blunt fat loss. You see, once your joints are out of position, your body has sub-sensory pain signals taking place all over the body. These pain signals tell your brain to shut down the muscles in the area in order to avoid “pulling on the injury” and causing more damage. The end result: no muscle contraction and weaker muscles.

We exercise to be stronger in our daily lives and live a longer/higher quality of life. If an exercise has no true benefit in either or both of these categories, then what’s the point?

Just because someone tries an exercise in a gym isn’t a reason to make this part of your routine. The gym is full of mostly amateurs, including several of the personal trainers at big name gyms. After all, that’s where many of us started out at one point or another...

“” into an unsafe position involves increased pressure on the labrum or capsule of a joint while performing an exercise. Simultaneously, it’ll be likely that a muscle is being overstretched while being recruited to contract. This is a recipe for disaster. Instead, let’s find a position of rest for the joint and then exercise it. This will assist the natural delivery of nutrients to the joint and joint capsule. 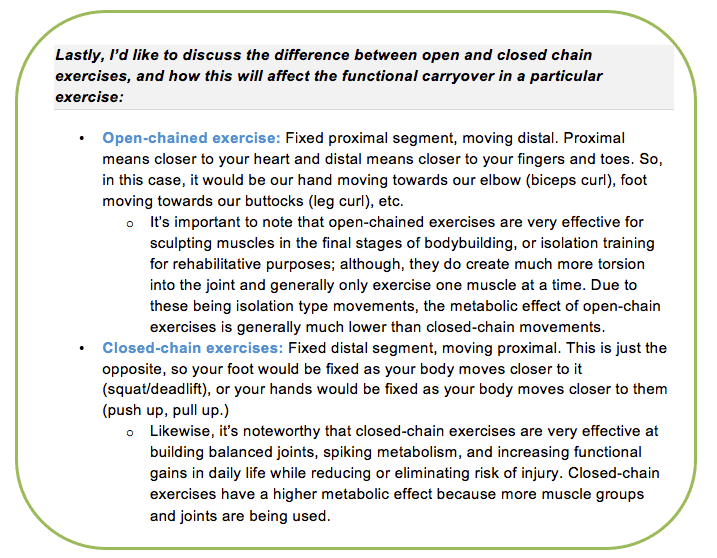 Ok, you’ve already got a great background for judging exercises and their quality, or lack thereof. Now, let’s dive in and take a look at the 7 worst exercises:

An imbalance between your quadriceps and hamstrings can quickly result in a number of knee issues, including patellofemoral (kneecap) and meniscus damage. Even worse, when your quads overpower your hamstrings, it’s not uncommon to develop restrictions in these muscles as your body attempts to even things out. These restrictions lead to increased pull on the top of your pelvis, tipping it forward, and placing pressure in your low spine.

This all sounds complicated, but let’s make it easy. Just stand up and lean backwards. If your hip flexors are tight, you’ll feel a stretch in the front of your thighs. It’s a good bet that we should get you training in more functional abs positions. You may already be spending too much of your day in this pre-shortened position, causing ‘active insufficiency’ to take place.

This comes down to torque. Think about a long screwdriver and a short screwdriver. It’s easier to use the long one, meaning you don’t have to turn it as hard. This is a result of the force of you turning the screwdriver x the distance to the end of the screwdriver. That’s how torque is calculated.

In this example, we are exercising above our knee, but the weight goes on our ankle. Think about that distance... that’s a lot of torque into our knees with a lot of weight!

Low. This is a single joint exercise that is isolation-based. By definition, there will be a low metabolic effect. Instead, choose more compound movements such as squats, deadlifts, or lunges for an increased metabolic effect with this muscle group.

This is a question of torque into the knee again. Also, in this case, the hamstrings tend to cramp a lot, which isn’t necessarily a good thing, or necessary at all.

If you have a Baker’s Cyst behind your knee, that’s a lot of pressure. For others, it’s really pulling the posterior horn of your meniscus, while missing your proximal (closer to your butt) hamstring altogether.

Low effect, as this is a single joint exercise.

Evening out all of your elbow flexors has more carryover effect.

Low effect, as this is a single joint exercise. In fact, it may be detrimental due to the likelihood of the sub-sensory pain stimuli going off in the shoulder girdle, preventing some of the neurological signal from reaching the muscle.

Low to medium. Since you are using your ankle, knee, and hip joints, the metabolic potential goes up slightly. However, it’s important to remember that muscle imbalances lead to all sorts of situations that lend themselves to a metabolic crash.

Low to none. Since we are only really working our elbow joint and a small muscle group, we aren’t gaining much of a metabolic effect whatsoever. Also noteworthy, this is an open-chained exercise that produces a lot of torque into the shoulder and elbow.

So, all in all, it’s causing a very small amount of damage with no benefit.

As you can see, not all exercises were created equally. I strongly recommend that you analyze an exercise before just going for it. I realize that you’re working hard to get great results, improve your health, and create a higher quality of life for yourself.

I’ve taken out all the guess work. As it turns out, you can get more than double the effect of most workout programs that last 1-2 hours in just 10 minutes . I show you how on the next page :